Things to do & see in Delhi before you die.

First in this series is Hazrat Nizamuddin Dargah, the shrine of the 14th century sufi saint.

Located at basti of the same name (Nizamuddin Basti), the Dargah is only accessible through narrow bylanes. In case you are coming here by car then park it on Mathura Road, next to Nizamuddin police station, and take a short walk. Normally crowded Basti streets are empty in the early morning.

Inside, candles are burning on a few unknown tombs jutting out from the floor. A pilgrim is sitting in meditative contemplation. The door to Hazrat Nizamuddin’s tomb is already open for the day. Sneak in to take a look (if you are a woman, peek through the stone jaalis for you will not be allowed in). Fresh roses are placed on the saint’s grave. 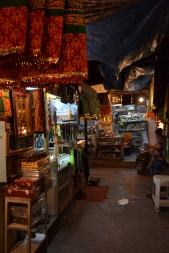 Built in the same courtyard and period, the Jamatkhana mosque, a few steps left to the Dargah, has a dozen odd people praying in front of its Western wall. Maybe it’s the pre-dawn darkness, or the moment’s sanctity, or the building’s historical worth or a mix of all, but the sights and sounds feel as illusionary as an early morning dream.

And when, the black sky above the Dargah’s Dome change to pale blue, the Dargah’s dome looks as heartbreakingly beautiful as my lover’s teardrop. 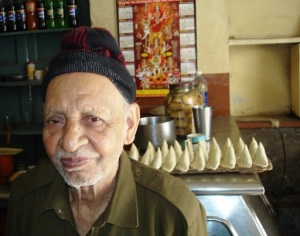 Today when I was driving thru the narrow lanes of Karol Bagh to avoid the main road rush, I spotted this small shop with lot of samosa ( my weakness ) and many customers sitting inside. Got curious to try it out since I visit Karol Bagh too often for work.
Actually thislane runs parallel to Pusa road. You can enter this lane from Jessa Ram Hospital side. There are only few shops there so you can easily make out where this shop is. 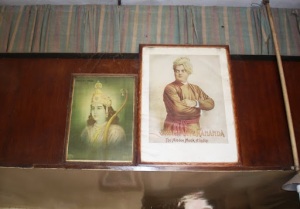 The shop is quite old .Only one old guy manage it. He said that samosas were being fried and I have to wait for 10 minutes. This old man enjoys customer loyalty so much so that people actually comes from as far as Trans Yamuna to eat his Samosas. One customer told me that he has came from Malka Ganj only to eat Samosa.

Now coming to the Samosa,s the main reason why it is famous is because they do not fill the mashed potatoes, but they cut them into small pieces, roast them and then fill them. Samosas are quite light with not much oil , the old man had taken his sweet time to fry them, this ensured that the crust was nice and crispy. The potatoes has subtle spices, nothing over powering the flavor, every bite and experience in itself.

After having smosas I start chatting with Old man , Pandit Ji who is basically from Rani Khet but came to Delhi in 1942. The shop war originally owned by his mama ji and he worked with them since the beginning. Mama Ji died 5 years back and now at the age of 86 he alone managing this shop. He also told me that Pandit Nehru and Sardar Patel were the big fan of his samosas and visited this shop several times. Wife of Somnath Chatterji also visited this shop for his Sondesh ( Bengali sweet ). He has 5 daughters , one of them in US and another one working in Delhi Police.

He also offered me some Sandesh made from “Kajoor Ka Gud”.

Here are some advantage of availing services of Radio Cab:

– The cars are very new and well maintained.
– Maruti Esteems and Tata Indigo Marinas.
– Can be pre-booked.
– Air-conditioned.
– More comfortable than any other cab.
– Boot space is good, and you don’t have to pay extra for piece of luggages.
– Drivers reliable and courteous
– They run by meter and will not overcharge.
– They are tracked by GPS by their companies and connected via radio sets.

If you are going by meter its only Rs.15 per Kilometer. Which is around 10% higher that other pathetic cabs. Night charges are extra, I guess 25-30% of the metered fair.

To Book , you can dial following helpline numbers :