The spirits were high and so were we, naturally so, my wife and I had planned a short & sweet ride to Ajmer & Pushkar. The bag had been stuffed with the barest minimum stuff we would require for the next two days of our itinerary. The Bull was sparkling as I polished it a bit extra that day as a rider messages his charger before the race. Ma & pa thought that we had gone berserk; they kept telling us as to why we were not taking our luxury car for this journey. Confused were they, as much as we were in explaining to them, the ‘Zen of riding’ which only a few of us could comprehend or I should say ‘feel’ it. Kids, who were told to behave at their grandparents home bid us adieu and we thumped off from Delhi in the midst of a perfect early morning with clear skies and pleasant breeze. The Bull was warmed for the 400km ride ahead; the engine was in perfect harmony with the weather. The macho thump and the wind through the helmet visor made a perfect orchestra which we passionately devoured on board. The first halt happened near Amber Fort, Jaipur – a quick cup of tea with a parantha each did a magic in rejuvenating us for the rest of the leg. The road was wide and inviting but I self-restrained from revving beyond 60-70 kph. While we rode I kept thinking what was it that gave us the thrill in riding and not in driving? Was it a mere representation of an idea of being energetic and young, a mere passion, or a show off or what was it? Whatever it might be, it is a great feeling and one has to live it to feel it, so said Charu, my wife! We were nearing Pushkar! The setting was perfect, a narrow by pass from Ajmer with small cluster of houses or ‘deras’ unevenly spread out in the wide expanse of ‘kikar’ and sand. 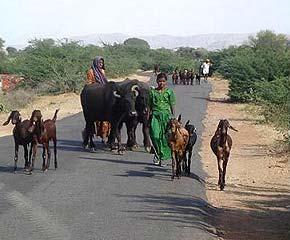 Children waved at us while running behind the Bull while we reciprocated with smiles and waving hands too. We were away from home, yet everything seemed so dear and nice. The Bull was thumping in the holy town of ‘Pushkar’ – the ‘holy thump’ it was! The echo of the thump against the walled town made several eyes turn at us in a welcoming manner. Pink Floyd, well that was the name of the Hotel where we checked in. The walls were meticulously done with classic bikes and, bikers and varied albums of Pink Floyd – the rock group. The room where we stayed was – ‘the other side of the midnight’ – one of the many Pink Floyd’s albums. It was a time for something to eat and to have a good nap. So we walked up the hotel’s terrace top restaurant. The setting was amazing – floor seating, with rarest of rare posters and curios of Pink Floyd. We were just craving for the grub and hurriedly opted for some Italian stuff. The few minutes wait, for the order was killing. Wow! The food was exotic – really luscious, pasta & lasagnas (hope I spelled it correct). It was beyond our belief to have access to such exotic food in a small town which could give a run for its money to any of big restaurateur in Delhi or Mumbai for that matter. The next day’s dawn happened amidst the thump of the Bull and we groomed off to Ajmer. We paid our homage at Khwaja Saab’s Dargah and steered towards Delhi. We hit Delhi by evening, covering 400kms .The welcome was planned and elaborate, as if we had scaled the Everest, but to be honest the feeling was amazing – that of achievement! The ‘holy thump’ still sounds nostalgic!