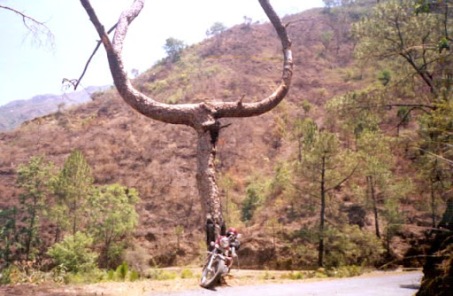 Before June 2003 my routine of going on rides on my Bullet was like monthly. But this time it was the longest gap of nine months and exactly after nine months I delivered a beautiful ride. The labour pain started early Saturday morning. But I could make it to the operation theatre only at 10:00 am. Soon as I crossed the Delhi border at 11:00 am, I delivered the ride. You can understand the feeling the road generates when you ride after a long time, especially for married men. I was in hurry to reach the mountains, to see the deep valleys, to feel the freshness of pine trees, to ride on the ghats…those lovely sceneries! My “Lady in Red” (Electra) was also in hurry and responding very well. I didn’t want to stop, so I crossed Karnal without any stop and when the road became two-way after Ambala, I stopped for a brief break. It was 2:00 pm. I had tandoori rotis with dal tarka and a glass of lassi. Within 25 minutes, I was again on the Bullet. Reached Chandigarh around 3:00 pm, spent around 20 minutes in a cyber cafe at Chandigarh to update the 60 kph Club about the ride and started again for Swarghat. I reached Ropar, then Kiratpur. Whenever I start riding on the Himalayas, I always feel excited like a kid. But the ride came to an end just after 18 kms on the ghats. Reached Swarghat at 6:00 pm and went directly to HPPWD rest house. The same old caretaker looked at me and smiled. ” Babu abk key to bahoot din mai aye”. Saley nai jatey hi jaley par namak daal diya. I was not tired, so I just kept the luggage (tool kit and a towel) in the room and started off again. I just didn’t want to miss the sunset. I looked for an appropriate spot and reached just in time. After spending almost two hours, I came back to the rest house, had dinner and slept. Sunday. I woke up around 6:00 in the morning, went for a walk and finally started my ride at 7:30. Reached Naina Devi, around 20 km from rest house. It was the first Navratra, so there was lots of rush. I parked my bike around 2 kms before the mandir. After Darshan I left for Bhakra Nangal that is around 25 kms from Naina Devi. What a ride! I was in no hurry, I was just cursing on my Bullet, stopping again and again. For the first time I felt that having a camera on rides is a nuisance. You spoil the present by trying to capture the moment for the future. It reminds me of a very interesting principle which the hippies followed, travelling with a camera was considered “not cool” and non-hippie because it was all about living the moment. Bhakra Nangal is a lovely damn. People told me that in summers when snow melts in the mountains, it looks more beautiful. I another hour there chatting with the locals, walking or just sitting around. Had aloo ka paratha with curd started again. Came back via Ananthpur sahib, reached Ropar and Chandigarh. Just after crossing Ambala, I saw a huge rush at a dhaba. People were jumping and shouting – an India – Pak match was in progress. I stooped immediately. This is the only plus point with people like me without any work… we don’t have to bother about tomorrow. No office, no work. So, I decided to watch the whole match at the dhaba. I started again after having dinner at the dhaba, it was 11:00 pm and Delhi was still 170 kms away. I reached home 4.00 in the morning.

There was an error retrieving images from Instagram. An attempt will be remade in a few minutes.