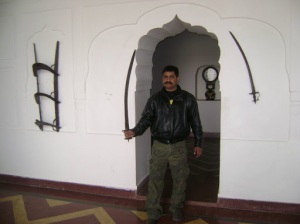 “Reached the highest point the ‘Burj’ of the fort. It provided us a birds eye view of the entire town which was magical, we could feel the sense of tranquility and placidness in everything there.”
It happened finally on the 23rd of Feb 2007, the much planned and talked about ride to the Shekhawati. Infact, a number of plans around this circuit were made, remade and polished, unfortunately execution missed for whatever reasons. It was decided on the previous night and we did not discuss it with other fellow riders due to the fear of it getting ‘jinxed’. Lady luck smiled on to us and the program was sealed with a confirmation over a SMS to my pal Shuja Ghazi Khan an ardent rider from NOIDA. On the NH-8 near Rajeev Chowk, Gurgaon at 8:00 am in the morning, I was frantically waiting for Shuja to arrive as I was itching with anxiety to ride my ‘Black Commando’ after a brief gap of a couple of months. The hunk finally arrived,….. infact two of them…the Bull & Shuja himself , standing at an enviable 6’3″makes an impressive rider, the likes of Arnold Shwarzenegger in Terminator. Anyways, we shook hands and zipped off on the cool NH-8 towards to indulge ourselves on the Shekhawati circuit. Shekhawati belt in Rajasthan derives its name from Rao Shekha who annexed large pieces of land in this region. The region comprises of the districts of Churu, Jhunjhunu & Sikar of Rajasthan. Hungry we were, so we decided in unison to halt at our favorite dhaba near the Bilaspur toll booth on the NH-8 for some parathas & chai. The stuffed parathas topped with local butter was a delight to the taste buds, over the hot tea, we lit cigarettes and discussed how this ride finally happened. We were back on the road cruising comfortably at 70 kmph. It was around 10:00 and and we crossed Narnaul, from where we took the road to Singhana. It was an approach road after Narnaul with heavy vehicles just not ready to budge & we being left with no option but to slide down on the rocky patches along the road. Since, it was just two of us, we could maintain an average cruising speed of about 60 kph. At around 1:00 pm we reached Chirawa a small town from where we turned right from the state highway towards Suraj Garh. About 18 kms away set amidst small houses and thatched roof huts, the place looked so good and placid. We rode straight to the Suraj Garh Fort owned by Tikarani Shailja & Tikaraja Asihwarya of Lambargoan, Kangra (H.P.). The expanse of the fort have now been converted into a commercial property catering to guests. We relived the bygone era of Rajas with long moustaches (even I sport one), ample of attitude, style and all that jazz. Wow! Was all we could wind it up in. The caretaker of the property, Mr Dinesh took us around and even permitted to take out the vintage swords from their sheath & have a feel of it. We were back on the road cruising towards Jhunjjhunu, the body clock alarmed us for a lunch break and we put our bikes in abeyance and indulged in a typical Shekhawati lunch at Ridhi Sidhi restaurant in Bagar, near the famous Ridhi Sidhi Hanuman Temple. The meal comprised of Kari Pakoda, Kaer – Sangri, sata roti, bajra roti & missi roti all laced with very generous helpings of pure desi ghee………..uuuhh!! the aroma still is fresh in my nostrils. Having spent a meager Rs 150/ for all this exotic stuff, we lit our cigarettes once again before getting airborne. Many heads turned all through the way to have a look at our machines which I guess they found intriguing and magnetic. So many plastic bikes are being launched each day but the recognition which a Bullet gets even today is amazing. We were now approaching the last leg of our journey – Mandwa. The road was single but amazingly exotic…..large expanse of sands on either sides with small hutments sprinkled here & there, small patches of ‘kikar’ added on to the natural beauty of this mesmerizing place. It was 4:00 pm & the bulls were now roaring inside Mandawa town, a small sleepy hamlet. We stopped in the local market and the shutter bugs took on the finesse of this town, each house or gate seemed customized par excellence by intricate masonry & carpentry. Having walked the town, we barged into the Mandawa Fort and reached the highest point the ‘Burj’ of the fort. It provided us a birds eye view of the entire town which was magical, we could feel the sense of tranquility and placidness in everything there. Having taken some rare frames, we decided t o call it a day and started back for Gurgaon and finally reached back at around 10:15 pm.
Route taken: Gurgaon–Rewari–Narnaul–Singhana–Bagar– Chirawa– Jhunjhunu-Mandawa
Distance Covered : 570 kms Timing – 8:00 to 10:00 pm (back to back)
Expenditure : Breakfast for 2 – Rs 70/ Lunch for 2 – Rs 150/